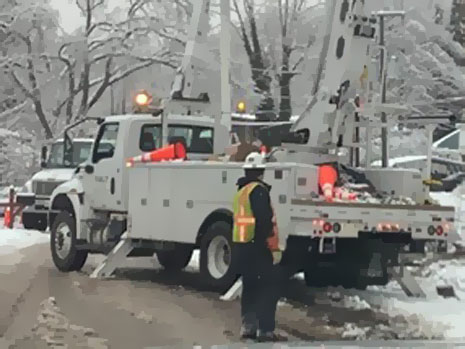 Winter Storm Uri was a major winter and ice storm that had widespread impacts across the United States, causing blackouts for over 9 million people in the U.S. & Mexico, including the 2021 Texas power crisis. The storm also brought severe destructive weather to Southeastern United States, including several tornadoes. Volt Power was on deck ready to serve local utilities in restoration efforts.

A note from Chad in Luftin, TX was sent to the Volt Power Storm Center thanking the crews who restored his power.  “We had multiple company’s show up, walked in looked at the pole then told us they would be back, but they never showed back up.   Volt showed up late that evening. I told them what had been happening, and the young guy told me that they weren’t going to leave unless his lights were back on, and it just made me and my wife happy.

The guys had to change the transformer out. They had a machine on tracks and another small truck show up, and they did it very quickly. I was very pleased. I just want to reach out to the guys and tell them thanks so much. I wasn’t able to get to them and tell them because they were in and out so quickly. Thank you for responding to my emails. Again, thanks for everything the crews do”.